Smartphone Addiction: 47% of all millennials think they are addicted to their phone📱😲

Having a mobile phone nowadays is more of a necessity rather than a status symbol. This statement is in light of our recent survey, that reveals that 92% of Irish adults have a smartphone. The majority of the Irish (66%) think it is necessary to have a smartphone nowadays.
iReach Insights conducted nationally representative survey and 1,000 adults were asked about their mobile use and their opinion about smartphones in Irish society. The survey has a 3% Confidence Interval and a 95% Confidence Level.

92% of our respondent’s state that they have a smartphone. 7% have another kind of mobile phone and only an unbelievable 1% say they don’t have a mobile phone at all. The average amount of time that people admit to spending on their phone is approximately 1hour and 45 minutes each day, although in reality this could be much more. 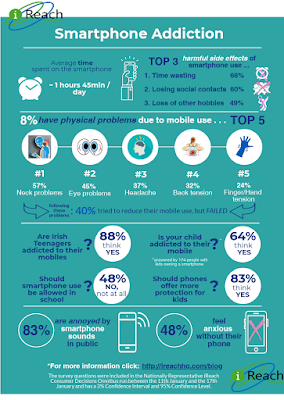 65% admit that they find themselves using their phone during work for non-work-related issues. That concerns 79% of the 16-34 age group and 67% of the 35-54 age group, but only 30% of the 55+ age group. Currently in the workplace, one-third of the smartphone users (31%) need their smartphone for work in order to do their job!

It’s no surprise that almost the half (47%) of the millennials (18-34) think they are addicted to their phone, whereas it is 31% of the 35-54 age group and only 16% of the oldest age group (55+). The younger you are the more likely that you are addicted to your phone. This is highlighted further by the fact that a total of 48% feel anxious when they don’t have their phone with them. According to our respondents, these are the top 3 harmful side effects of over using smart phones: 1. Time wasting (66%), 2. Losing social contacts in real life (60%) and 3. Loss of other hobbies (49%). Furthermore, 84% state that they check their phone “occasionally” up to “all the time” even they don’t see or hear receiving a message or notification etc. Only 2% state that they never check their phone without an alarm signal.

80% of the Irish noticed that people are increasingly on their phones when they are socializing with friends or family. But more than that, 82% find it rude when people are on their phone excessively when out socialising. More female (86%) think this than males (78%). Furthermore, 83% feel annoyed by people using their smartphones in public without turning off the sound.
Smartphones have only been around a short while and alarmingly 8% of the Irish have suffered from physical problems due to an overuse of their phone – not to forget the 14% who are not sure. The Top 5 health problems those 8% of people suffer from overusing their phone: 57% have neck problems, 45% eye problems, 37% headaches, 32% back tensions and 24% suffer from finger or hand tensions. Despite having smartphones having such a huge impact on people physical health, 40% tried to reduce their phone use, but miserable failed and 14% didn’t even try to reduce the amount of time on their phone

From our 174 respondents with a child that owns a smartphone, 64% of these think that their child is addicted to their phone. Even worse, 88% of all respondents think that Irish Teenagers are addicted to their phones. Unsurprisingly, almost the half (48%) of the Irish society think that children should not be allowed to use their smartphones at all in school. 29% think smartphones should only be allowed to be used in a case of emergency. This means, less than one in 5 (18%) think it is appropriate for children to use a smartphone in school. Understandably, 83% of the Irish say, that smartphones should offer more settings to protect children and teenagers.


In light of these results, maybe Irish Society should think about how we teach our children to use and handling mobile phones, and other technologies such as tablets and laptops. Above all, we can’t know yet what effects the increasingly use of smartphones will have on our bodies. Especially the younger generations who are growing up with smartphones will probably deal with more physical problems, since our heads and necks are not made for looking down all the time. Only time will tell what effect smartphone will have on Irish Society.
For more information on these research findings please feel free to call iReach on 01-2143740 or email to oisin.byrne@ireachhq.com

Posted by iReach Insights at 10:44 No comments:

Mental Health: 81% of people think that it has a stigma attached to it! 😷


Statistically, yesterday was the most depressing day of the year and with 47% of adults in Ireland feeling deflated and low returning to work this January. We decided to ask our panel about their mental health. IReach Insights conducted a nationally representative survey of 1,001 adults in Ireland who were asked about the importance of mental health and different things they do in order to improve their mental health. The survey questions were included in the Nationally Representative iReach Consumer Decisions Omnibus run between the 11th January and the 15st January and has a 3% Confidence Interval and 95% Confidence Level. 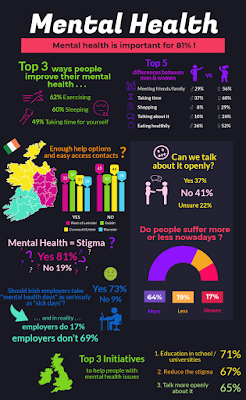 81% of adults in Ireland stated that mental health is important to them. The top 3 activities that people do to improve their mental health is 1. Exercise (62%), 2. Sleeping (60%) and 3. Taking time for themselves (49%). This survey also looked at the difference between genders and the way in which the different sexes find different solutions for improving their mental health. The Top 3 differences between the gender is 1. Meeting up with friends / family with 29% of males doing this and 56% of females doing this. 60% of females take time for themselves compares with 37% of males. Unsurprisingly a lot more females (29%) than males (8%) partake in retail therapy.
In the survey we asked if people think that there are enough helplines and easy access to contacts in Ireland for people who would like to get help! Opinions were divided with 37% responding that no there are not, 33% think there is and 30% are on the fence stating they are unsure. When we consider the regional differences, opinions varied widely. Of those 37% saying that there not enough helplines or easy access to contacts in Ireland for people: Dublin – 32%, Rest of Leinster – 45%, Munster – 36%, Connacht/ Ulster – 44%. This suggests that there is more helplines and access to contacts in Dublin compared to other parts of Ireland.
Although there is increased media coverage surrounding mental health issues and various celebrities having come forward in recent years to talk about their own mental health issues, a huge 81% of people still think that mental health has a stigma attached to it. In general, 41% think mental health is a topic you can’t talk about openly in Irish Society, 36% think you can talk about it openly and 22% are unsure.
Unsurprisingly, 64% of people in Ireland think that we suffer from mental health issues more nowadays than in the past. In comparison to other countries, 42% of people think Irish people are less open than other nationalities about talking about mental health issues. It can be difficult to approach the topic of mental health with employers, but in some cases, this is necessary if you need to take time off. 73% of people think employers in Ireland should take mental health days as seriously as sick days. In reality, 69% of people don’t think employers in Ireland do take mental health days as seriously as sick days.
We have made progress in recent years, especially in raising awareness when it comes to mental health and wellbeing. With that in mind the most popular initiatives that can be implemented to help those with mental health issue is Education in Schools / Universities (71%), Reducing the Stigma (67%) and talking more openly about it (65%).

Posted by iReach Insights at 12:21 No comments:

Christmas and New Year seems like a distant memory at this point, although most of us have only been back to work one week! iReach Insights conducted nationally representative survey on over 1,000 adults in Ireland who were asked about New Year’s resolutions and feelings about going back to work in January!

The survey questions were included in the Nationally Representative iReach Consumer Decisions Omnibus run between the 14th December and the 18st December and has a 3% Confidence Interval and 95% Confidence Level.


After Christmas, almost half of all adults in Ireland (47%) felt deflated and low when they returned to work in January. This affects more females than males with 44% of men quoting that they feel this way after holidays, whereas 51% of the female respondents do. Surprisingly only 27% of the 55+ age group claim they will feel deflated and low. 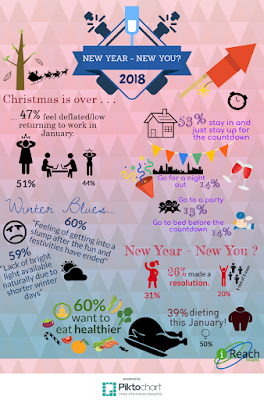 Of those who feel deflated and low when they return to work in January, the majority (60%) of all adult’s state that the feeling of getting into a slump after the fun and festivities have ended being the reason. Lack of bright light available naturally due to shorter winter days is another reason for having the Winter Blues after the Christmas Break.

Christmas time can be an expensive time for some adults in Ireland and 30% of adults cite having unpaid credit card bills for Christmas expenses another reason for the Winter blues. Interestingly, it seems the older you are the more likely are to be affected – affects 21% of 18-34 years old, 35% of 35—54 years and 38% of those over the age of 55.

How did people in Ireland celebrate New Year’s? It’s no wonder that more than half (53%) of our respondents planned to stay in and stay up for the countdown and a further 14% stayed in and didn’t ring in the new year. Even the younger adults (18-34) barely want to celebrate in town for a night out (22%) or at a party (15%).

New Year – New you? Not if it concerns the Irish. In fact, only 26% of Irish adults made a New Year’s resolution this year. However, over a third (39%) are dieting this January. A lot more females are dieting than males. Every second women started a new diet in 2018, just 28% of men have. Like every year, it is not a surprise that the majority (60%) of adults in Ireland state to try to eat healthier after Christmas time.

Posted by iReach Insights at 10:27 No comments: