Terrorism - How safe do people feel in Ireland? 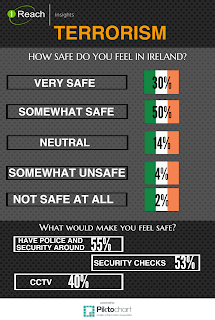 55% of people in Ireland consider terrorism to be a threat in Ireland.

More than half (52%) of adults think the terrorism is reported correctly by the media.

If compared with the results from a survey carried out in February 2017, there is an increase of 4% that think terrorism is under-exaggerated (30%).

Over half (52%) of us think that everywhere has the potential to be a dangerous terrorist hotspot.

Half (50%) of adults feel somewhat safe in Ireland and 30% feel very safe.


55% feel safe having police and security around.

ISIS’s attacks are an ongoing threat to the Western World, but terrorism continues to affect us with recent attacks London and in Paris. In a recent survey conducted by iReach Insights, 1000 adults were asked about their thoughts on terrorism. As a result, 55% of people in Ireland consider terrorism to be a threat in Ireland. When looked at closer, there is a trend that the older you are the more you consider terrorism to be a threat (45% of adults aged 18-34 and 72% of adults aged 55+). It is also emerged that 82% of adults in Ireland had never taken anti-terrorism measures to guarantee their security.

Of that 18% who answered Yes when asked “Which measures have you taken to keep yourself safe?”, 57% said they have avoided crowed places, 34% didn’t travel, 22% memorised emergency numbers and 12% cancelled holidays. Going deeper it’s emerged that of those decided to cancel their holidays 18% are men and 7% women. 38% considers effective against terrorism give up vacations in certain cities, 30% stay away from crowed and popular venues, 28% learn how to behave when facing a terrorist attack, 20% know some key phrases (like “I need help", "Take me to a doctor!") in the language of the country they travel.

There are different forms of security that make people in Ireland feel safe. 55% feel safe having police and security around, 53% feel safer when there are security checks at concerts or a large events, and 40% think that CCTV makes them feel safe. Although the majority of us (82%) who live in Ireland are not used to take anti-terrorism measures to feel safe the survey highlights how we try on our on to manage daily this fear, and what normally makes us feel safe.