We are constantly surrounded by brands, both in person and online, taking the form of advertising, celebrity endorsement, and social media, as well as many others. Intentionally or not, this impacts perception of the people and goods represented. Therefore, brands can influence consumers’ decisions to purchase one item over another, and companies must be aware of their brand and what it conveys. This is especially true amongst youths, many of whom are active on social media, one of the major tools companies can use to create and maintain their brand.
In a recent survey, iReach Insights asked 16-24 year olds in Ireland about brands and the conditions which influence their decision to purchase goods.
The survey questions were included in the Nationally Representative iReach Consumer Decisions Omnibus run between of 9th of November and the 16th of November and has a 3% Confidence Interval and 95% Confidence Level.

The survey also shows that 70% follow a brand or personality on social media, with 37% following both. One-third (33%) specifically reported following clothing brands such as Nike, Oasis, or Cos. Nike, in particular, was reported by 19% of youths as their ultimate favourite brand. Other popular brands and personalities include social media personalities and Bloggers such as Lisa’s Lust List with 20% of youths following at least one and tech companies such as Apple and Google with a following of 13%.

In terms of purchasing goods, clothing is the number one item youths reported most commonly purchasing at 49%. Food followed next at 32%. When it comes to buying goods online, 4 in 10 reported using Amazon, while 30% listed Boohoo.com. Only 14% stated that they don’t online shop.

With 72% of youths naming their phone as the number one essential item that every teenager must have, social media and the online world is becoming more and more integrated into everyday life. Therefore, its influence on brands and public perception cannot be ignored.

Tattoos are becoming increasingly popular, especially with the younger age groups, and we want to find out if the negative connotations that used to be associated with tattoos, are still maintained in today’s modern society. In our recent survey, iReach Insights asked 1,000 adults across Ireland about their opinions on tattoos and their own tattoos.
The survey questions were included in the Nationally Representative iReach Consumer Decisions Omnibus run between of 8th of September and the 15th of September and has a 3% Confidence Interval and 95% Confidence Level. 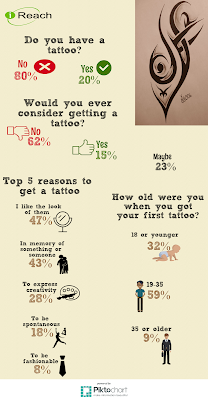 One in five adults in Ireland say they have at least one tattoo. This figure increases considerably with the younger age cohort. Over one in four (27%) aged 16-34 year olds have a tattoo, one in five (20%) 25-54-year olds do and Less that one in ten (7%) over those over 55+ have a tattoo. Despite that fact the more people are getting tattoos over half (54%) of adults in Ireland believe that tattoos still have negative connotations associated with them. 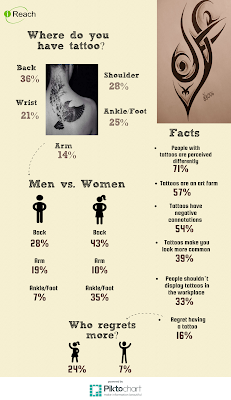 Astonishingly, there is no legislations regulating tattooing in Ireland, meaning there is no legal minimum age. However, many tattoo parlours will refuse to tattoo people under the age of 18. Considering this we asked how old people were when they got their first tattoo. One third (32%) of people got their first tattoo when they were 18 or under, 59% of people got it between the ages of 19-35 and 9% of people got their first tattoo when they were 35 or older. Only 16% of people regret having a got a tattoo, interestingly more females (24%) regret it than males (7%).
To find out the Irish public’s view on tattoos and whether there is still a stigma around tattoos we asked some questions and looked to see what the Irish public think. Over two thirds (71%) of people think that people are perceived differently if they have a tattoo and 39% think tattoo make you look more common. However, 57% of adults in Ireland think tattoos are an art form and 33% think that people should not be free to display them in the workplace.

Although one in five people in Ireland have a tattoo, or many tattoos, there is still seems to be a stigma surrounding tattoos.
Having a tattoo/tattoos may be an art form and a way to express yourself and creativity, but there is no denying that there is still a negative social stigma associated with tattoos in Irish society.

Yesterday 1st November, was World Vegan Day and this is becoming more popular with an increasing number of celebrities promoting the vegan lifestyle, on social media and even through dedicated section of their personal website - Ellen DeGeneres dedicates an entire section of her website “Going vegan with Ellen”.  Historically there was only the Vegetarian Society in which the section devoted to non-dairy vegetarianism has been developed, but now Veganism is becoming increasingly popular.
In light of this we conducted a survey conducted by iReach Insights, 1,000 adults were asked about being Vegan and Vegetarian. Vegetarianism or Veganism are life-styles that may be adopted for various reasons that space from animal rights, ethical motivations, religious beliefs and health related motivations. In iReach’s latest survey we want to gain an understanding why some people in Ireland have opted for this lifestyle, and also those who haven’t.
The survey questions were included in the Nationally Representative iReach Consumer Decisions Omnibus run between of 24th August and the 31st August and has a 3% Confidence Interval and 95% Confidence Level.

The majority (92%) of adults in Ireland state not to be vegetarian nor vegan, 6% of adults are Vegetarian and 2% are Vegan. When talking to those who follow a Vegan lifestyle, we asked “How long have you been vegan?” 67% have been Vegan for less than a year, 18% have been for 1-3 years, 7% for 4-10 years and 8% over 10 years. In relation to Vegetarians and it showed a lower “conversion ratio” in the last year; in fact 11% became vegetarian less than a year ago, 28% 1-3 years, 13% 4-10 years and 48% over 10 years ago. Although there are less Vegans (2%) in Ireland this lifestyle is becoming more popular year on year. Going deeper an interesting difference has emerged amongst men and women, more men (77%) went Vegan than women (47%) in the last twelve months, but the percentage of women (23%) that went vegan for 4 years or more is higher than men (12%). Similar scenario, in the last 3 years more men (61%) went Vegetarian than women (30%), but more women (70%) than men (40%) went “veggie” for 4 years or more. Females adopted these lifestyles earlier than males.


What reasons have led to people choosing this lifestyle? 61% of adults in Ireland indicate “Animal Rights/Welfare” as the main cause. 30% select “Environmental Reasons”, 30% “Don’t like meat” and lastly 26% “Health Reasons”. Of those have pointed out “Environmental Reasons” 44% is represented by adults aged 16-34 and 10% by adults aged 35-54; these figures show that younger adults are more concerned about the environmental effects that eating meat has. 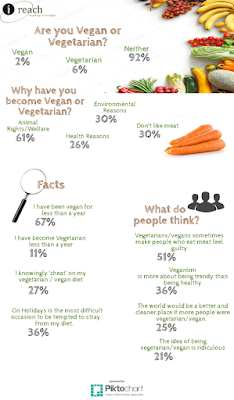 The decision to follow a specific lifestyle, particularly in diet, means we have to pay a lot of attention to the quality of what we eat. Despite their caution, 40% of vegan/vegetarian adults in Ireland have accidentally eaten non-vegetarian / vegan food at least once, 15% admit they don’t know and 45% state that this has never happened to their knowledge. When asked “Do you knowingly ‘cheat’ on your vegetarian / vegan diet?” 27% have admitted that they have! Now the question is: on what occasions is more difficult not to be tempted? “On Holidays” (43%) is at the top of the list, At home with relatives or friends (34%) and at the Restaurants (20%). In terms of who is more tempted during holidays the figures show that more women (45%) than men (39%) are straying from their vegan / vegetarian diet.

What do people in Ireland think about this topic? In fact, half (51%) of adults think that vegetarians/vegans sometimes make people who eat meat feel guilty about it, 27% disagree with this statement and 22% are neutral. In addition, 21% of people think the idea of being vegetarian/vegan is ridiculous, 34% are neutral and 45% don’t think this is ridiculous. The Irish public opinion is quite fragmented about the choice of being vegan or vegetarian which emerged through further questions. In fact, 36% of adults think Veganism is more about being trendy than being healthy, 35% is neutral and 29% believe it is more about a healthier lifestyle choice.

Would vegans/vegetarians’ behaviours effect on make our world a better and cleaner place? One in four (25%) think the world would be a better and cleaner place if more people were vegetarian/vegan.  Even if the public opinion is not so convinced about the positive effects of being vegan/vegetarian on our society, 59% of adults believe that always more and more people will decide to live two lifestyles, a number that is constantly increasing over time.

Posted by iReach Insights at 19:00 No comments: