Thanks to Niall Horan and his crutches, Twitter wins at Brit Awards

Last night’s Brit Awards, was one of the main events in the UK pop calendar. Television viewers were allowed to vote on Twitter for the Best British Video. It is the first time one of the big music awards was decided through social media. To ensure that the poll is not rigged, viewers were told only on the night how to vote and will need to tweet their choice using a special hashtag. No surprise for Irish Viewers that One Direction where with winners of the Best British Video with Niall Horan alone having 17.3 million Twitter followers.

Tweets with mentions of Niall Horan and One Direction jumped from a daily average of 1,000 to over 30,000 last night more than any other act or performers on the night. Niall’s crutches also got a lot of mentions which helped drive Twitter traffic on the night. See the Twitter Topic Wheel from our Social Insights Platform looking at last nights Tweets 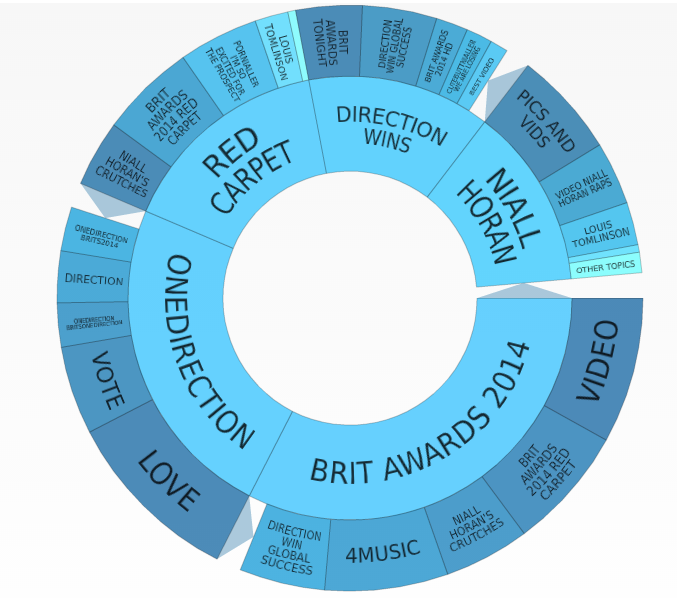 In France TV executives have called on the government to take "urgent measures" to guard them against the pending arrival of streaming services such as Netflix and tech giants like Google. The heads of France's three largest private TV networks, TF1, Canal+ and M6, are pursuing a meeting with the French Culture Minister and are appealing for action to protect their dominant market positions in France.

A comment on the stand-off between Netflix and broadband providers. The dispute centres on broadband providers, who offer their own on-demand services, asking Netflix to pay them for carrying its data. Netflix has so far refused, in spite of admitting customers are suffering delays and lower-quality pictures. However we are seeing the "Netflix effect" that has seen viewers increasingly taking in entire TV seasons in on-demand marathons. There is nothing wrong with binge-watching as a thoughtful, smart way to enjoy new shows when this time is right.
Posted by iReach Insights at 10:08 No comments:

Facebook use by 8-16 year olds and launch of Paper

Facebook usage by kids and the launch of Page

New research suggests that 52 per cent of eight to 16-year-olds ignored Facebook's official minimum age limit of 13 when they joined. The report for online safety guide Knowthenet found that messaging applications for smartphones are also popular among children, with WhatsApp used by 40 per cent of eight- to 16-year-olds, BBM by 24 per cent and Snapchat by 11 per cent.

Facebook turned 10 this week and the company has unveiled Paper a new "personal newspaper" app. It is designed to provide news from established sources as well as the latest thoughts from friends. The app, called Paper, the launch of which coincides with the social network's 10th anniversary this week, is designed to give users a stream of news around their interests. Flipboard is seen as the market leader in the space when compared to Paper, Facebook's new app. If you our your business are big into Facebook then Paper might offer a better way than ever to consume and contribute to Facebook, while taking in a much broader picture of your interests, industryy or the world......

While Facebook celebrates it's 10th birthday the industry is still trying to get to terms with new forms of market dominance of Google The European Commission has reportedly signalled a peace deal after a three-year dispute with Google, accepting a third offer from the technology firm that would give rivals and advertisers greater screen prominence for their products and services. The agreement will pertain to both desktop and mobile use, and last for five years. Rivals and complainants in the case strongly criticised the proposed settlement, arguing that Google has outwitted the EU regulator.
Posted by iReach Insights at 09:59 No comments:

Almost four out of five British managers identified learning how to make the most of social media as an area they need to excel at by 2020 if the economy is to grow and compete internationally, according to a recent survey published by the Chartered Management Institute. iReach Survey results issued recently suggests business managers in Ireland have a similar view to their British counterparts.

Social Media is all around us in business, but with something so fluid and rapid in terms of consumer trends and direction constantly changing, business managers are faced with the choice to invest time and effort in adoption or 'leave best alone'. Being able to tap into such trends is a powerful source of business insights for many organisations.

However Social Media has it's down site. Twitter is facing increasing pressure to stem the flood of abuse on its website after two stars were targeted by internet trolls. Olympic gymnast Beth Tweddle and former England footballer Stan Collymore are the most recent high-profile figures to receive sexist or racist taunts and threats. Industry experts suggest the US social media firm has a responsibility to do more to protect its users.

Recently TalkSPORT banned any mention of Twitter after accusing the site of "not doing enough" to support Stan Collymore over the death threats and racial abuse he received from users. Chief executive Scott Taunton criticised the microblogging site, saying that, as well as boycotting it on air, in print and on its digital platforms, it will also stop promoting Twitter and its own Twitter accounts.

As with something so powerful, there is always a down side, but still much to benefit business leaders in gaining competitive advantage.
Posted by iReach Insights at 09:24 No comments: