Leo Varadkar and his Favorite Players

The survey questions were included in the Nationally Representative iReach Consumer Decisions Omnibus run between 22nd of June and the 29th of June and has a 3% Confidence Interval and 95% Confidence Level.

In our new survey, we found out the point of view of 1000 adults in Ireland about the change in leadership here. Nearly two-thirds (65%) of Irish respondents are pleased with Varadkar’s replacement of Enda Kenny. With a majority (62%) of those that are pleased, agreeing that he “represents modern, diverse and open-minded Ireland.” 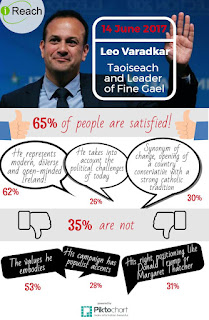 Of all respondents, 48% said “His arrival to power proves the positive changes in Irish society in the last years.” 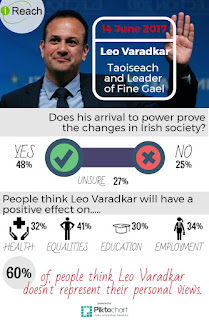 Four out of five (80%) individuals agree that government should make a change regarding corruption, but 52% of people think that Varadkar will have no effect or a negative effect on corruption in his term of leader.

Similarly, around three-quarters (77%) of Irish adults would like to see change on education, but 40% do not think Varadkar will have a positive impact on it.
71% of respondents like Varadkar’s policy on capitalising Ireland’s opportunities from Brexit. Varadkar looks to take inward investment, trade, and European Agency relocation opportunities. 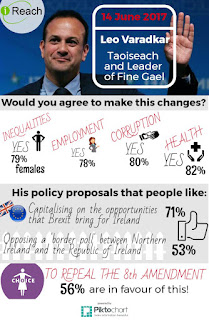 Varadkar also plans to hold a referendum in 2018 to repeal the 8th amendment. Over half of Irish adults are in favour of this (56%), 31% are indifferent and only 13% aren’t in favour.

Leo Varadkar has been in power for just over a month now and has already announced that a referendum will be held in 2018 and is planning to lay out a road map for achieving a low carbon economy. Only time will tell how successful Leo Varadkar will be.

Posted by iReach Insights at 18:00 No comments:

About the Irish weather and how does it affect morale 😀😊😐😒 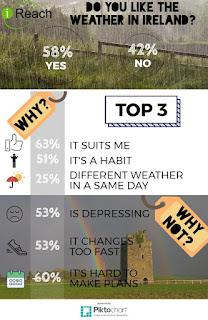 For 81%, the good weather makes them feel happy.

63% of adults in Ireland think that sometimes the weather affects their mood!

74% of people think there is a connection between the weather and their mood/morale.

One in five (19%) of those affected by the weather, believe the good weather leads to a decrease in appetite. 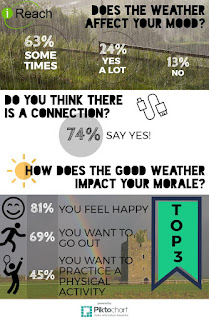 Due to the Atlantic Ocean and the Gulf Stream, Ireland doesn’t suffer from the extremes of temperature – it’s never that cold and it’s definitely never that hot! The climate is mild throughout the year and changeable: The Emerald Isle’s weather is never predictable. The average number of "wet days" varies between 151 and 225 days per year depending on the region and the wettest months, in almost all areas are December and January. In a recent survey conducted by iReach Insights, 1000 adults were asked about their opinions Irish weather and whether this affects their mood.

When asked “Does the weather affect your mood?” the respondents’ thoughts were as follows: 63% “Sometimes”, 24% “Yes” and 13% “No”. Additionally, our findings show 3 quarters (74%) of the Irish population think there is a connection between the weather and your mood, also revealing that 12% more females (80%) than males (68%) think there is a connection. These figures might make you wonder to what extent are these people affected by the good weather? Unsurprisingly, over three-quarters feel happy (81%), they want to go out more (69%) and they further want to be able to practice a physical activity more regularly (45%). Other interesting findings show of those affected by the good weather (74%) are that one in ten (10%) have decreased concentration in good weather and one in five (19%) have a decreased appetite.

With all the constant talk and complaining about the weather in this country, it’s surprising that 58% of people like the weather here in Ireland. There’s always a comment on the weather; in the summer, it’s too hot and in the Winter, it’s too cold!


SIGN UP, TAKE PART in our surveys for free and GET REWARDED! iReach Conversations

Posted by iReach Insights at 16:22 No comments: 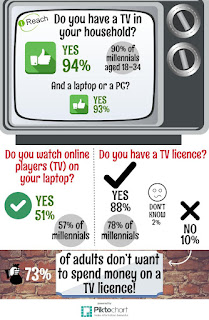 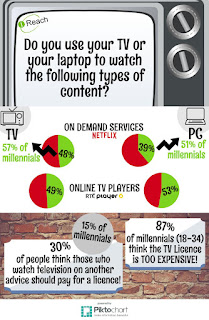 Economic and technological advances are impacting the behavior of people in our society – people can access information quicker than ever before. These technological advances mean that “watching TV” has a different meaning than it had before. In the past, “watching TV” would generally be done at home and on a TV set, whereas nowadays you can watch TV anywhere and on any smart device at any time. In Ireland, every household with a TV set must have a TV licence for each year. In a recent survey conducted by iReach Insights, 1000 adults were asked about their behaviour and opinions regarding the TV licence and the use of their TV and laptop/PC.

Unsurprisingly, 94% of adults have a TV in their household and interestingly, the younger age group [18-34 years] is less likely to have one with only 90% of them having a TV. 93% of adults in Ireland have/use laptop or PC. Half (51%) of adults watch online players (TV) on their laptop/PC – interestingly the younger age group [18-34 years] is more likely to do so with 57% of them watching online players.

There is a new trend amongst the “millennials” (aged 18-34) when it comes to TV and online services - they are more likely to go online to watch TV and on-demand services and generally don’t want to spend money for online players (85%). This age cohort is less likely to own a TV and those who do own a TV are less likely to pay for a TV licence. When looking at the new trend amongst the younger cohort, it seems that owning a TV is becoming less important and online streaming is becoming more popular. Does this means that traditional broadcaster should shift their focus to online broadcasting?

Posted by iReach Insights at 11:28 No comments:

Check out our last survey results about cyberbullying and social media! 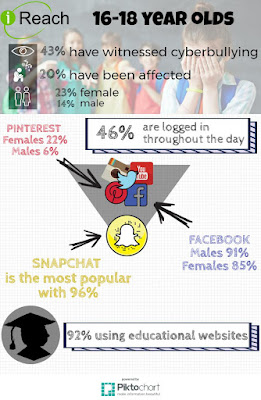 70% of the 16-18 age group rely on the internet to find out about college courses and CAO points.

92% of young people (aged 16-18) use online resources for educational purposes.

Cyberbullying, although a relatively new phenomenon, is a definite downside that comes along with the technological advances that have been integrated into today’s society. A study, regarding cyberbullying and social media in general, involving 225 young people between the ages of 16-18 took place between the 25th of May and ran until the 13th of June. The participants were asked to complete an online survey and here is what we found:

These cyberbullying figures might make you wonder to what extent are these young people (16-18 years) interacting with social media? Astonishingly, 46% of the 16-18 age group claim that they are logged into their social media accounts throughout the day (morning – night) and surprisingly 10% more males (53%) than females (43%) claim to be logged in throughout the day. For females, the morning time is the most common time to log into social media (47%) which could mean that they do not like to leave their social media accounts unchecked for long periods of time!

Less surprisingly, Snapchat is the most popular social media app for the 16-18 age cohort for both males and females. Females (22%) tend to prefer Pinterest more so than males (6%) by 16%. Whereas males (91%) favour Facebook more so than females (85%) by 6%. Twitter is most popular amongst 16-18-year-olds residing in the countryside at 25% compared to 18% in the cities, furthermore when it comes to Whatsapp (a communication app) it is 10% more popular in the cities (51%) than in towns and the countryside (both 41%) – perhaps this is due to higher quality internet services in the cities.

Online websites prove popular among the 16-18 age group for educational purposes with 92% using them. Nevertheless, when comparing female usage with male usage of educational websites the findings exhibit that at age 18 100% of females use educational websites compared to 57% of males of the same age – a 43% difference! Since this is around Leaving Certificate age, it is surprising that more males are not using online educational resources. Additionally, when it comes to learning about college courses and CAO points the majority of 16-18-year-olds (70%) rely on the internet which means that it is important what is out there on the World Wide Web regarding college courses and CAO points in Ireland.