In a recent survey conducted by iReach Insights, 1,000 adults were asked about having a romantic relationship in the workplace. Given the choice, most of us would probably prefer not to meet our partner in the workplace. It raises all sorts of issues, and some time it is a sensible idea to keep your personal and professional life separate, but nothing is ever that straightforward and sometimes we aren’t so sensible.

The survey questions were included in the Nationally Representative iReach Consumer Decisions Omnibus run between of 20thJune and the 28th of June and has and has a 3% Confidence Interval and 95% Confidence Level. 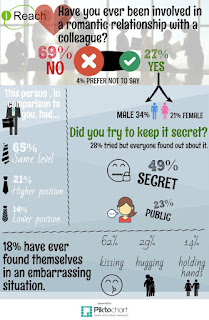 27% of adults have experienced a serious and romantic relationship with a work colleague. We noted a significant difference between the 35-54-year old (33%) and the 55+ (19%). This seems to show us that the culture is changing, and maybe the gap between work life and private life, nowadays it’s not so important and both are becoming more intertwined. Half (49%) of people kept the relationship a secret (at the beginning), 28% of people tried to keep the relationship a secret, but everyone found out and 23% went public from the start of the relationship.

These figures might make you wonder have these people ever found themselves in an embarrassing situation because of this workplace romance? Astonishingly, only 18% say yes! And the most common reason to get embarrassed is that 62% get caught kissing.


Additionally, our findings revealing that two-thirds (65%) of those who had a romantic relationship at workplace confirm that the person they had it with had the same level position, 21% a higher position and 14% a lower position. 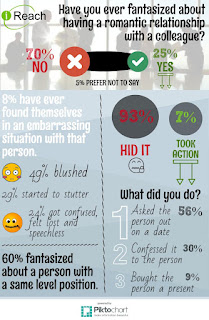 Less surprisingly, in our survey, we also talked about fantasises with one in four people fantasising about having a romantic relationship with a work colleague. More males (34%), than females (18%) confess to this! 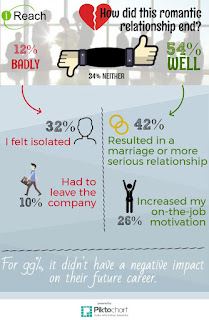 💓👫👫👫
How did this relationship end? It is surprising to learn that only 12% ended badly. 54% have a happy ending and 34% of adults concerned say neither. Obviously, we can think after a break up this could potentially of had a negative impact on your career but 99% confirm that it didn’t!

How do we move in Ireland? Check out our last survey! 🚌🚆

Different transportation modes have their advantages and disadvantages when you are commuting and travelling. Travelling by car is convenient and comfortable but you must find a carpark and pay, the train is fast but can be longer to reach as there isn’t many stations and can be expensive, the bus is cheap but there’s too many stops and it takes forever to get anywhere! It’s difficult to find the best way to travel and especially at peak travel times. In cities in Ireland, especially Dublin, you have to decide if price, convenience or time is most important and then sacrifice the others.

In a recent survey conducted by iReach Insights, 1000 adults were asked about their use of public transport in general and for commuting. 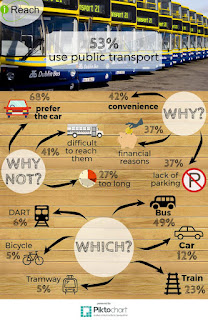 Half (53%) of the respondents use public transport! Unsurprisingly, the highest figure is 72% for the people of Dublin and the lowest number of users Is Munster at 36% - half the amount of Dublin. This is most likely due to the multitude of public transport in the capital and its periphery. Of those who commute by public transport, 42% is for the comfort and the convenience, financial reasons (37%) and due lack of parking at destination (37%). 22% use commuting as a time to rest/relax, 20% have environmental reasons and the others report the speed (22%), the fuel efficiency (19%), the managing of their time (17%) and their health (14%). 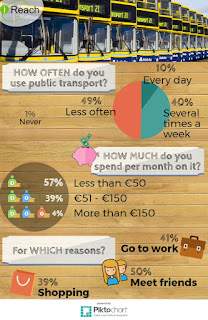 We asked, “Which means of transport do you use most frequently when commuting?”. The following ranking is not surprising: bus is the most popular (49%), followed by train (23%) and car (12%). The other ones share the users fairly; DART (6%), Tramway/LUAS (5%), bicycle (5%) and unsurprisingly only 1% use a taxi.

Of the public transport users, only 10% of respondents use public transport daily whereas 20% use it 5 days a week. 20% use it several times a week and 25% only several times a month. There are still 25% who use it less often/never. The cost of public transport varies regionally, with bus fares in Cork costing €1.80 and the same distance could cost €2.70 in Dublin (Cash), which is reflected in the higher average spend in Dublin and Leinster compared to Munster, Connacht and Ulster. When looking at the nationwide figures; more than half of people (57%) spend less than €50 per month on transportation. Nearly one third (30%) spend €51-€100 and only 13% spend more than €100. Ireland is a very car-dependent nation and alternative measure need to be enforced to persuade more people to use public transport.

Posted by iReach Insights at 18:30 No comments: